What have I been up to?
- Doing half of my required enlistment units this semester and half the next
- Throwing myself stark naked into the job market
- Having my junk up in the school cases & gallery (which feels lovely enough to brag a bit here ohoho)
- Making really wonderful friends
- Coming out of the glass closet (because I thought it didn't need to be said but apparently it did?)
- Baking loads
- Funerals sadly

I still use this for the communities but otherwise you can find me on the blogger: http://oyeavelar.blogspot.com/ for arts ( way behind thanks-in-a-good-way to school)
and the tumblr linked there.
Take care ya'll !

Since I started dating meine nase I've come to see why (some) of my friends dropped off the face of the planet when they got serious. I've dated before, spent loads of time with them and nearly married one but they've never taken up so much time before. This is especially funny seeing as we're both insanely busy.. he has school, full time work, a daughter and family obligations. I have running around for school and work, family, holiday bullshit, studying and HIIIIIIIMMMM.
MY GOD MAN. HIIIM.
When he had his phone on him it was constant text messaging, calling and emailing ( we're working on a project together which is how we started dating) Now that he's lost his charger it's CONSTANT emailing, checking of the phone for emails and generally not doing dick but running off to see him on breaks, working from the computer so I can check emails and just wow... TIME. It bothers me that it bothers be but when I have things to do it veers into " so... why did I want this again? oh yeah, he's great nevermind *checks phone* " More on this later, right now I have to run off to watch my nephew.

So... I'm seeing the incredibly hot librarian from down the road. Yeah, it is pretty nice.
Pardon me while I strut around for a bit hoping he doesn't one day figure out how neurotic I am.

post 5 interesting facts about yourself
- I move my room/ the apartment around constantly, even if it's perfect it must be switched up or I get antsy... maybe this is a problem...

-I take apart my food and eat everything separately unless I'm in someones car, then it gets torn discreetly into little pieces.

- My best ideas pop up in the bathroom

- I yell at late-night t.v and eat cereal in honor of my grandma

- I love getting dressed up and going to the grocery store at weird hours.

I HAVE NEW NEIGHBORS! And they suck big time!
They've made me feel like the neighbor who croaks from friends, minus the girlie clock.
It's a tiiny one bedroom apt. like mine, I know the folks who used to live in it and babysat for them multiple times. These guys have turned it into a loud ass clown car.
THINGS THAT ARE NOT OKAY:
- trash fucking everywhere
- people making out/fighting/ drinking on the staircase when you assholes live downstairs
- novellas/radio at top fucking volume, I walked down to the dumpster (where your trash goes guys!) and could still hear it.
- screaming kids, as in standing outside your door and screaming at you and traffic
kids are kids, I know they make noise, my first job was at a daycare, second was at disney, I know kids I also know shit parenting
- weed, especially when your creepy ass boyfriend tried to sell it with your little girls there

Only a couple months and I get to move out, this shit is insane.

Making a ton of posters for my buddy Beckas missing cat Lilly. She's been missing for 4 days now and it's not like her so if you or anyone you know lives in the LosAl, Rossmore, Cypress, LB, Seal Beach area please be on the look out for a small, one year old cat with grey fur, white paws, and a black nose + beauty mark. Her family and brother really miss her and life just isn't the same without her attention whoring and chirruping hello's at everyone.

Sorry I've been offline for the past four days guys! My Email was exploding (mostly with creepy messages from the dating site I joined) but I have returned to you unharmed. Still can't be mad at the at&t guy who blew up the box outfront because he was so sweet when he personally called everyone he had screwed over and apologized but eh, point is it's back on.
Anyway, time for bed then to actually put a picture on my profile to scare away all of the gorgeous menfolk in the morning.

Waiting to go to the beach with my buddies and their dog. 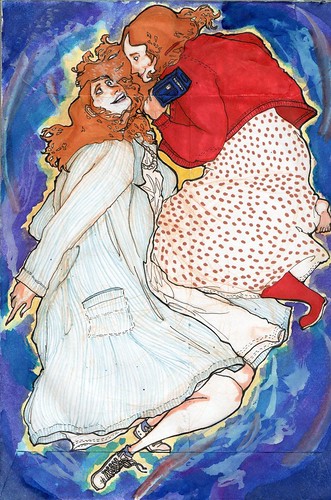 Done on the back of an envelope in markers and watercolors.
Not 100% happy with it but I did learn white out and prismas don't mix.
Keeping up with the art blog starting with this and the Doctor sketch I have started!
Now to bed before midnight for once, GERONIMO !!!!

right...
Dear Brain:
Look, I'm super happy you want to draw again, really. What's really great is that it's actually beyond the crap I have churned out lately, it's awesome, really. The project of all of my embarrassing relation/dateship moments using monsters/ other characters was a good idea though, why did they turn out so shitty I don't even have the heart to scan the two we finished? Because you want to draw fucking Amelia Pond fanart at three in the morning? Really? She's great, really and while I would've pegged you for a River fan that's not the point. The point is I'm not 13 anymore, really really, that's right, we're 21 and we have Yoga in the morning.GO the fuck to sleep and if you're going to keep us up again, it better damn well not be for fanart, I will expect some deep soulful shit here... yes the Amy picture made me weepy...what? Introspection and about doing what you would've wanted as a child? What? That is shit and I'm going to bed.
No more fucking fanart at three in the morning, the hell is wrong with you?
- I'm going to go brush my fucking teeth
color and scan that
Me
Collapse